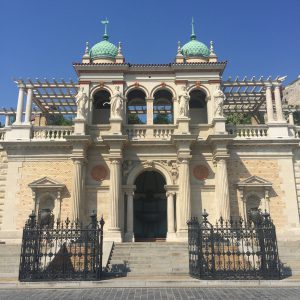 The Várkert Bazár is situated on the Buda side of Budapest, directly on the banks of the Danube River, within walking distance of the Parliament Buildings, the historic Chain Bridge, and Budapest’s beautiful old town.

Often described as the “Little Paris of Middle Europe”, Budapest is famous not only for the monuments reflecting its own 1,000-year-old culture, but also for the relics of others who settled here. Remains from both Roman occupation and much later ruled by the Turks can still be seen in the city. After the Ottoman Empire the union with Austria has a particular influence on the city’s form and style. The capital has two sides, Buda and Pest, stretching along the banks of the Danube, representing two different characters of the city.

Budapest has a lot to offer. Museums and galleries, churches and synagogues, palaces and historic buildings, baths and pools are presented together with the influence of Secession in the city.

There is an unmistakable feeling that something out of the ordinary is just around the corner, but what it will be is up to you to find out…


how to get there

The easiest way to get to the hotel is by taxi. Don’t hail a cab on the street! Call one of the following numbers to order one:

If you already have your hotel booked, you can ask them if they can call a taxi to pick you up.

If you are travelling on your own, you may also choose to use the Airport Shuttle service, which has a desk at the airport. Tickets can be purchased at the arrival customs area or at the LRI Airport Passenger Service desk in the waiting area. Click for rates: http://www.airportshuttle.hu/en/

For further details how to get from the airport to the city centre, please check: http://www.bud.hu/english/passengers/access_and_parking

GETTING TO BUDAPEST BY BUS

Flixbus – offers bus services to Budpest from within Hungary and from other countries bordering it:
flixbus.com

The following hotels are close to the Pneumo Update Europe venue, and are listed for your reference. The hotel reservations can be booked directly through the hotel.
Additional Booking Information
Please note that in order to make a reservation a credit card may be required. The distances listed to the venue are approximations. Additional hotels may be found at www.hrs.de